I had a 10 mile long run planned for last Sunday and I had really hoped that I would be able to run it outdoors.  A nasty ice storm was headed for Chicago, however, and my area was supposed to start getting freezing rain around 9 AM and I didn’t think that I would be finished with my run by then, so I decided to run it on the treadmill.  Of course this meant that the freezing rain didn’t come until 3 PM or 4 PM, but running longer distances on the treadmill has been difficult for me, mentally, since my injury, so it was good for me to work on running in less-than-ideal conditions and to push through when I got bored. I was able to finish all 10 miles and my legs actually felt really good after the run and not tired at all.  I took Monday as a rest day from running, but did make it to a yoga class which was great but I was sweating like crazy because they had the room at about 90 degrees.

Today it’s been unseasonably warm (it was 59°F when I woke up).   Over the past few weeks I’ve been doing my tempo runs on Thursdays, but I’ve really been enjoying doing my tempo runs outdoors and it’s going to be pretty cold for the rest of the week, so I decided to switch my tempo run (7 miles) to today.  The temperature wasn’t bad but it was really windy–20 MPH winds and I felt like I had a headwind for most of the run.  My splits were awful because of the wind (and maybe because my legs were a bit tired), but I was really good about keeping in the right heart rate zone for a tempo run, so I’m hoping I still got all of the physiological benefits of the tempo run.  Storms have been rolling through all afternoon, so it was also all gray and dreary.

Get the best hip-opening yoga poses sent straight to your inbox.

It rained a lot on Sunday and a little yesterday, so the paths were a little soggy.  The trail was actually pretty squishy in some places, and it also rained a bit during my run, too.  The wet conditions gave me a good excuse to wear my Ghost GTXs (mine are based on the Ghost 4 shoe model). 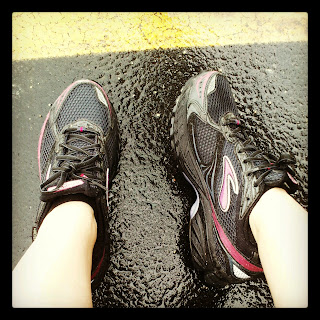 My Ghost GTXs after my run (and after I rinsed them off
by having a little fun splashing in a puddle).  No leaks!

They kept my feet dry the entire time. I’m so glad I bought them, and I’ll probably get a pair of the Ghost 5 GTXs at some point, too. If you’re a fan of Brooks shoes and you want a waterproof pair for runs on wet days, I highly recommend checking out their GTX shoes.  (Brooks also makes a GTX version of their Adrenaline shoe.)  The GORE-TEX really does a great job of keeping the water out.  I think the GTX version of the shoe feels a little stiffer than the regular Ghosts, but that’s fine for trail running, and it’s definitely something I’ll tolerate to get the benefits of the GORE-TEX liner.  This may not be true for their newest GTX shoes.  I’ll write an update if/when I wind up getting a pair of the newer version.

How have your runs been going this week?
Have you had to change any of your running plans due to the weather?
Do you have different pairs of running shoes that you use for different conditions?

Hi, I'm Dr. Beth Brombosz! I'm a yoga teacher, running coach, and writer living in Oklahoma. I would love to help you create a healthier, more satisfying life. Join me on the journey!

Sublimely Fit is a personal blog and all opinions are my own. I am not a medical professional. Please follow the advice of your doctor first and foremost. Although my intent is to do no harm, if you are injured following my opinion or something you have read here, I am not responsible. I am not responsible for comments written by others. Disrespectful or profane comments may be deleted. Privacy: I will never sell your email address or other information. Click here for the full privacy policy.